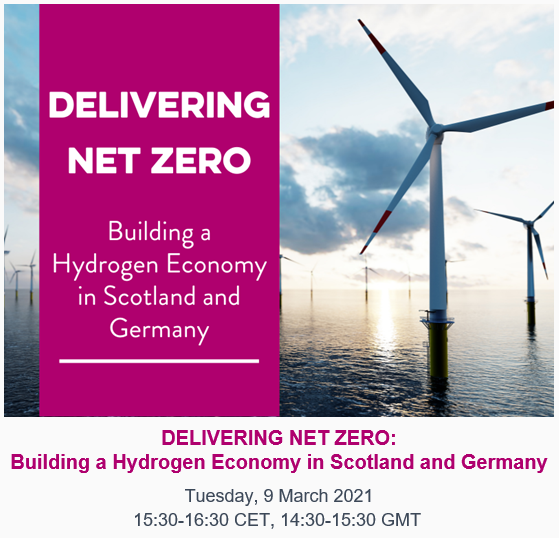 Building a Hydrogen Economy in Scotland and Germany

In December 2020, the Scottish Government published its Hydrogen Policy Statement, confirming support for the strategic growth of a strong hydrogen economy in Scotland. It sets out a vision for Scotland to become a leading Hydrogen Nation in the production and export of reliable, competitive, sustainable hydrogen, with an ambition to generate at least 5GW of renewable and low-carbon hydrogen by 2030 and at least 25GW by 2045.

The German Government has outlined similar plans in terms of green hydrogen production by 2030. Germany’s Länder will be crucial to the delivery of these ambitions, and it is in this context that Baden-Württemberg published its own roadmap to 2030.

This event will outline and assess the work the Governments of Scotland and Baden Württemberg are taking forward to deliver a viable hydrogen economy, the challenges and opportunities ahead and the scope for collaboration. It will be set in the context of wider EU hydrogen ambition, as described in the European Hydrogen Strategy, and through the work being undertaken by Hydrogen Europe to develop a viable hydrogen industry in the EU.