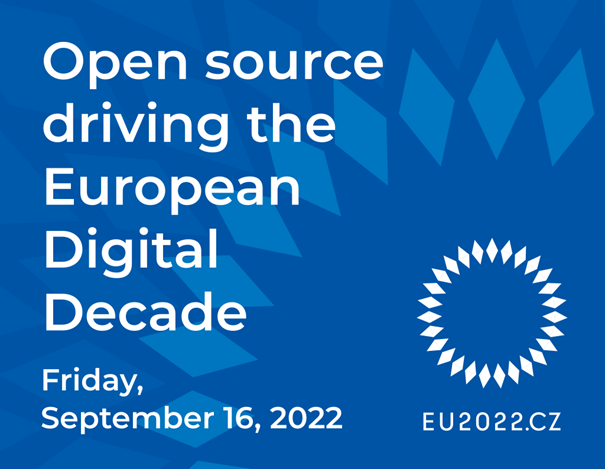 The event 'Open Source Driving the European Digital Decade' will take place on 16 September from 09:30 to 18:00.

The aim of the event is to raise awareness of the use of Open Source technologies with a special focus on the digitization of public administration (and the academic sector) and to start a discussion on the establishment of the so-called National Open Source Program Office (OSPO). This office (OSPO) would aim to help specifically the public (and academic) sector to introduce open innovation in public administration and to promote cooperation across the EU in this area.

Default-to-open policy has provided the necessary legal foundations to adopt and contribute to open source infrastructure across several key European verticals as well as all EU27 Member States. Many of the mission critical IT systems are open source and thus not only provide enterprise grade solutions but simultaneously realise Digital Sovereignty objectives. Similarly, open data has been a topic of discussion for years which could follow the same path as software code when it comes to agile co-innovation. If data is the new oil, more and more attention will be given to the legal constructs related to sharing and business models as well as the underpinning infrastructure needs. To achieve openness’ full potential in terms of economic growth, innovation and digital autonomy the entire spectrum and ecosystem should now be considered.

From being a fringe activity 20 years ago, Open Source Software (OSS) is today the fundamental innovation layer of the digital world. In fact, 92 % of all applications use Open Source components. It remains the case that the standards for future technologies are set by open source communities. As such, open source will shape the digital markets for years to come.

Consequently, the impact and growth potential of open source in the European economy is vast. It was outlined in a much read study by the European Commission, published last year. The findings of the study predict that if open source contributions increased by 10% in the EU, the region would see its GDP increase by €100 billion, more than doubling the value of OSS for the EU. However, according to the research, to reap these benefits, there is a need for culture switch and significant investments in open technologies.

There is already significant momentum behind open source as an important tool to drive innovation at scale in European digital policy. In addition to EU procurement rules being revised to adopt and pay for open source solutions there are increasingly initiatives to boost the Public Sector’s operational capacity to contribute to open source, such as:

For governments, open source solutions are delivering world class digital services that are not only meeting demands of Digital Sovereignty, but also create positive economic externalities for the country or region.

In addition to these public sector policy efforts, from an industrial policy and geopolitical perspective, OSS is being discussed strategically by the European Commission and in the member state capitals. It is central to the conversations around competitiveness, increased digital competition, AI development and cybersecurity, to name a few

Registration possible at this link.

This meeting will take place online