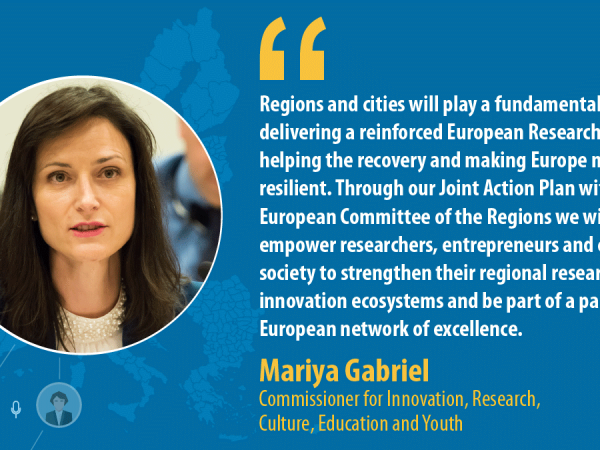 Commissioner for Innovation, Research, Culture, Education and Youth, Mariya Gabriel, joined a debate at the Committee of the Regions (CoR) plenary to discuss the recovery of the creative sectors and the role of regions in the European Research Area (ERA). The Commissioner used the opportunity to highlight the important role of regions in innovation and the need to develop synergies between education, innovation and research, as well as between funding programmes. The proposed ERA Hubs were identified as a tool that will stimulate local innovation.

The Commissioner went on to announce the launch of the ERA Forum for Transition, for which the first meeting took place on Thursday 4 February. The forum is a group of experts from Member States, with regions currently represented in the forum at an associated level. During her intervention, Mariya Gabriel confirmed the CoR's participation in the forum, though the CoR has since expressed disappointment that the ERA governance is still centred around the Commission and Member States.

The ERA Forum will work to develop the governance of the ERA and the upcoming Pact for Research and Innovation.

CoR rapporteur, Christophe Clergeau, contributed at the debate, highlighting that the ERA Hubs are an ideal instrument for a place-based approach to R&I and that this approach is more necessary than ever in the context of the current crises.

ERRIN continues to follow the development of the new ERA, including the ERA Hubs and Forum for Transition and looks forward to learning more details about how the regional dimension will be included.