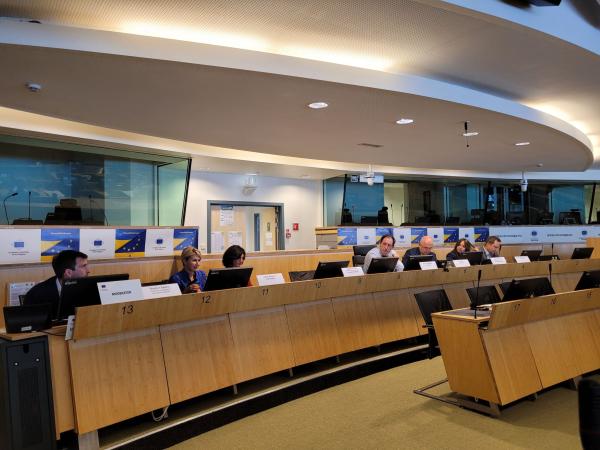 The European Committee of the Regions and the European Commission DG RTD held on 22 June in Brussels the first Knowledge Exchange Platform (KEP) event of the year, focusing on the way ahead for building synergies for successful green and digital transitions.

The renewed KEP 2.0 initiative aims for the exchange of new R&I solutions and best practices, by organizing horizontal seminars in Brussels, and promoting so-called peer-to-peer and showcasing events organised on the ground. It allows for an efficient dialogue and transfer of expertise on R&I issues with European cities and regions, businesses, universities and citizens.

As a KEP partner, ERRIN was actively engaged in the workshop, discussing the implementation of policy and programme synergies to deliver on the EU Missions and foster breakthrough innovation. ERRIN Director Pirita Lindholm moderated the panel discussion on ‘ongoing and future strategies and initiatives’ like the European Innovation Agenda with the participation of András G. Inotai, Guia Bianchi, Karolina Tilman, Neville Reeve and Daniel Szmytkowski from the European Commission.

ERRIN Vice-Chair Bogdan Chelariu from the North-East Regional Development moderated the second debate around concrete examples of innovative practices of European regions and cities, including from ERRIN members. Precious inputs relating to initiatives such as New European Bauhaus, Mission on Climate Neutral and Smart Cities and Partnerships for Regional Innovation, to which over 45 ERRIN members were selected to take part in the Pilot Action.

You can find more details and watch the recording of the workshop here.