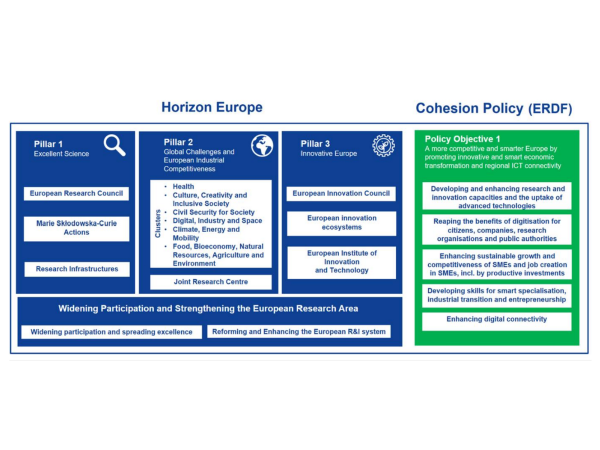 Guidance on synergies between Horizon Europe and ERDF is out

The guidance on new opportunities to maximise the synergies between Horizon Europe and the European Regional Development Fund (ERDF) programmes was published by the European Commission on 5 July 2022. The document intends to provide a practical and user-friendly approach.

The publication gives an overview of legal and implementation details of all new opportunities for achieving operational synergies, including for the Seal of Excellence, transfer, cumulative funding, co-funded and institutionalised partnerships, Teaming, and upstream/downstream synergies including missions. Public bodies intending to support Seal of Excellence holders can find suggestions and examples for their actions.

You may find the new guidance here.

The topic of funding synergies is also one of sectorial priorities of the new Czech Presidency of the Council of the EU in the area of research. Last week, the Czech Presidency kick-started with a conference dedicated to this issue on 7-8 July in Prague. Miia Paananen, ERRIN Smart Cities Working Group leader from Turku-Southwest Finland EU Office took part in the discussion on synergies in the context of the European missions. The conclusions of the event were presented in the form of the “Prague Declaration on Synergies in the Research and Innovation Funding in Europe”, which should be followed by Council Conclusions later during the year.