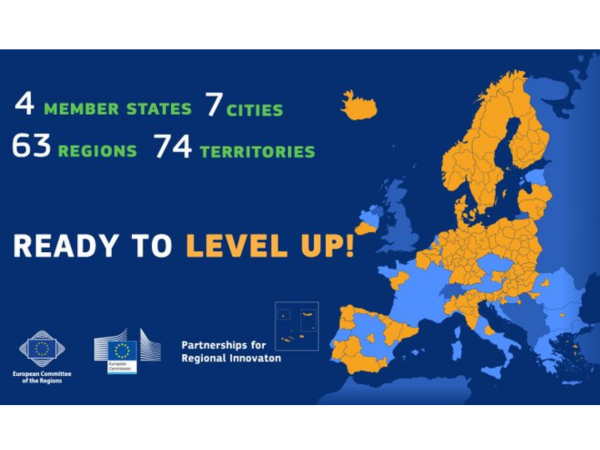 PRI is a complementary approach building on positive experiences with smart specialisation strategies (S3). Its goal is to test tools for better coordination and directionality of regional, national and EU innovation policies towards implementation of the twin transition and tackling the innovation divide in the EU.

The Partnerships will feed into the new European Innovation Agenda, where innovation drives the transformation for sustainability, connecting local strategies with EU-level initiatives. ERRIN submitted its response to the European Commission's call for evidence for the development of the Innovation Agenda initiative last week, learn more here.

The PRI Pilot Action that kicked off today will run for one year, gathering 63 regions, seven cities and four Member States to co-develop and test the approach. European territories could submit their interest to take part in the Pilot by April 2022 and the selected ones were announced today.

ERRIN is happy to see that 48 ERRIN member regions and cities will take part in the PRI Pilot. Congratulations to all our successful members, including representatives of our Smart Specialisation Working Group leaders: Central Sweden (North Middle Sweden & East Middle Sweden) and Tuscany. ERRIN has been providing coordinated assistance to members interested in applying to the Pilot and stays committed to supporting collaborative activities within this initiative. We would like to provide opportunities for ERRIN members to share their PRI experiences and to support peer-learning among the 120 innovative European regions part of the network.

During the event, the PRI Playbook was also presented as the initial guidance document underpinning the Pilot, showcasing a range of tools and governance mechanisms and introducing local missions to coordinate actions under a coherent directional logic, enabling the exploration of broad-ranging policy mixes for system-level innovation. Over the course of the pilot, the tools will be further improved, adapted and tested against the realities of European regions and Member States.

Territories selected for PRI Pilot Action that are ERRIN members: