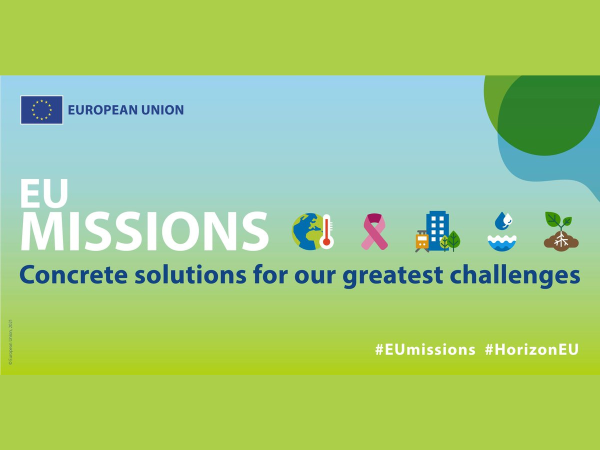 The European Commission has today launched its five Horizon Europe Missions as a new way to work towards ambitious goals related to health, the climate and the environment by 2030.

Today’s launch included the publication of a Commission Communication on European Missions, announcing some key updates within the five missions. An ‘all-in approach’ is to be established, which acknowledges that societal challenges, such as those addressed by the missions, require contributions from different levels of governance and actors, including researchers, innovators, education institutions, businesses, investors and civil society. It also lays out a new relationship with citizens, by making finding solutions a more attractive process to the people they involve and changing the societal impact of research and innovation through bottom-up processes.

ERRIN has been following the progress of the missions since the development process began in 2019. Over the last two years, ERRIN’s Working Groups have organised information sessions, provided input to consultations and enabled close dialogues between members and the European Commission in order to ensure regional and local perspectives were strongly considered throughout the design phase of the Missions.

The Mission on Climate-Neutral and Smart Cities aims to see at least 100 European cities reach the climate-neutral and smart city status by 2030, paving the way for Europe to become the first climate-neutral continent by 2050. ERRIN has especially been following the development of the Climate City Contract, which is the innovative governance tool that will ensure all key actors, including and especially citizens, are able to work together towards this ambitious goal.

Just yesterday, the Energy and Climate Change WG held a meeting on the Mission on Adaptation to Climate Change. In the frame of this Mission, the plans to make available €100 million for large-scale demonstrations to address major climate-induced hazards, such as flooding, fitted to local circumstances. The Mission also aims to help at least 150 regions and communities in their efforts towards climate resilience by 2030. ERRIN has been actively involved in the development phase of this Mission through workshops jointly organised with the European Commission and the EIT Climate-KIC that took place in October 2020 and March earlier this year.

In June, ERRIN’s Blue Growth WG organised a dialogue with the Mission Restore our Ocean and Waters secretariat to discuss the role of regions in the area-based lighthouse demonstrators, producing this report after the event. The WG is looking forward to a continued effort towards regional and local involvement in the lighthouses, which were today announced to be organised thematically and by basin. The Health WG continues to follow the Cancer Mission, while the Bioeconomy WG is closely following developments in the Soil Mission – today renamed as the ‘Soil Deal for Europe’ Mission.

You can read more about all of ERRIN’s work on the Horizon Europe Missions on this page, which will direct you to our dedicated pages for each mission.

The network will continue to follow each of the missions and encourages members to follow the subjects on the ERRIN website for future announcements. Read more about today’s news here and in the attached documents.